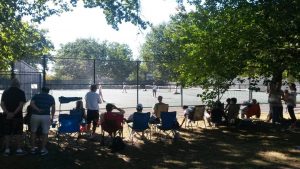 The Essex County Girls Tennis tournament has seeded its field of eighteen teams and is set to compete.

On Tuesday, September 17 the Preliminary Round team match ups will be played with Irvington (18) facing Nutley (15) while Bloomfield (17) takes on Belleville (16). Later that day the First Round and Quarterfinal Round will be competed. The tournament is held at the Althea Gibson Tennis Center in Branch Brook park and shall utilize all eighteen of the complex’s hard courts.

On Saturday, the 21st the winning teams from Tuesday will play the Semifinal Round and draw down to the championship team final. Also on Saturday the Consolation Rounds will be played out.

The individual titles for the singles and doubles championships will be competed on Sunday. Both Saturday’s and Sunday’s rounds shall also be played at the Althea Gibson Tennis Center.

You may view the tournament’s bracket by clicking on the link below.