Last year’s champions defended their titles at the Essex County Lacrosse Championships doubleheader at West Essex High School on Saturday. In the boys final Seton Hall Prep, the top seed,  won its’ seventh consecutive title with a dominating performance over second seeded Glen Ridge, 12 – 4. Glen Ridge was the last team to take the title from Seton Hall, claiming the championship in 2011 and 2012.

Glen Ridge High School did come home with the championships trophy on the girl’s side as the Lady Ridgers, seeded number one,  defeated Montclair Kimberley Academy, seeded second, by a score of 12 – 9. The championship is the fourth in a row for Glen Ridge. 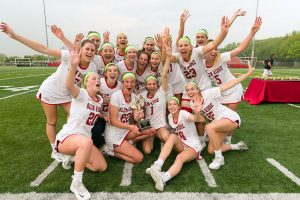 The complete tournament brackets may be viewed by clicking on the links, below.