Little Falls, NJ– May 28 Continuing a beloved tradition in local high school sports, for the eighth consecutive year the Yogi Berra Museum & Learning Center honored student athletes from member schools of the Super Essex Conference in a celebration of the qualities that made Yogi Berra a national treasure. Recipients of the 2020 Investors Bank Best Teammate Award, selected by their respective athletic departments, exemplify the strength of character, sportsmanship and supportive spirit that, though often unheralded, are vital to a team’s success – qualities that were on full display Thursday evening, despite the ceremony being held virtually, instead of in the Museum’s theater.

“So much has been cancelled this season,” said Eve Schaenen, the Museum’s Executive Director, in her welcome remarks to the students on the zoom. “Winter seasons were cut short. Many of you who are spring athletes didn’t have the opportunity to play at all. And yet, your athletic directors still chose you as Best Teammate. What that says so clearly, this year more than ever, is that the qualities of a great teammate are identifiable in you… because of who you are as people, as much as who you are as athletes.”

The 34 winning students, together with their parents, grandparents, coaches and athletic directors, had the opportunity to hear from special guest Kevin Cummings, Chairman and CEO of Investors Bank, the long-time sponsor of the event. In congratulating the recipients, Cummings stated: “You make other teammates better because you have those intangible assets that help people to be the best versions of themselves.” Participants also heard from Larry Berra, Yogi Berra’s eldest son, who illustrated the value of teamwork using his Hall of Fame father’s sport: “They always say when you play baseball, you can be the MVP of a team, you can be the greatest player, but the greatest player on the team has to realize, if you’re a shortstop, you need a first baseman who can catch the ball.”

The ceremony provided an evening of welcome connection in a season of social distancing, as students were called out one by one with cheering and applause from family members also visible on the screen view. Perhaps the best illustration of the special meaningfulness of the 2020 event came from the father of Caleigh Trachtman, Best Teammate Award recipient from Millburn High School. Caleigh’s father appeared in the zoom seated in a dentist chair, about to undergo emergency dental treatment. He said to the group using his dentist’s phone, “I’m about to have a root canal, but I wouldn’t miss this even for a root canal.” 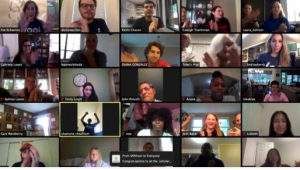 The Yogi Berra Museum & Learning Center is a nonprofit sports education organization on the campus of Montclair State (NJ) University. The Museum’s mission is to preserve and promote the values of perseverance, respect, sportsmanship and excellence through inclusive, culturally diverse, sports-based educational exhibits and programs.

For additional information about the Museum, please visit www.yogiberramuseum.org or call 973.809-2043.

This entry was posted on May 30, 2020, 8:34 am and is filed under Conference News. You can leave a response, or trackback from your own site.